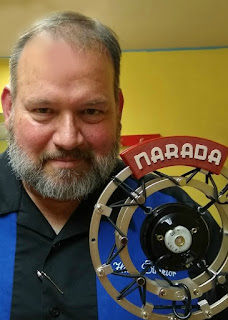 My entry for PULP REALITY #1, "Prepare to Be Mr. Fye", is an origin story. Perhaps the title gives this away? But with this tale we meet Jinx Duncan, a young sleuth in a big-city detective squad. He's smart, conscientious, and, even though he doesn't know it yet, destined to become something even greater in the annals of crime-fighting: Mr. Fye!

If you haven't yet read the story I don't want to spoil anything for you, so I'll just tell you how the story came about for me. As a writer, my chief milieu is audio dramas: I've been writing scripts sporadically for audio drama since 2001, and on a more steady basis since 2013, when I created my first podcast series, PULP-POURRI THEATRE.

For the first season, I wrote a dozen pulp-fiction adaptations, and had to read a lot of pulp tales in order to find ones that were suitable – both lending themselves easily to adaptation, and presenting a story good enough for my audience to hear. Reading all of these yarns gave me a terrific education on the pulp style: quick, spare and brutal, not to mention highly entertaining, on a purely visceral level. The best ones had some dark humor as well. This helped as I continued with seasons two through four of my series, not only with more adaptations, but also with original plays. I did my best to create an atmosphere of "pulpiness", while at the same time avoiding any "on-the-nose" situations – in other words, by not obviously saying, "Look, we're being all pulpy, ain't it great?"

Now we come to 2017. I was invited to bring my acting troupe, The Narada Radio Company, to Pulpfest 2017 in Pittsburgh, to perform one adaptation of a Robert Bloch story, and one original play. The former was "Return to the Sabbath", a creepy tale of 1930s Hollywood; the latter was "Prepare to Be Mr. Fye". The short story that appears in PULP REALITY #1 is in fact a reverse-engineered audio drama – a 180-degree come about in my usual adaptation method. Whereas I usually took out third-person narration and substituted music and sound cues, I had to plant them into my story to keep things flowing. It was quite a challenge, but I think I did a good job.

To return to my promise of telling you how I wrote the story, I should explain my habit of jotting down ideas in a little notebook. Some time before I wrote the audio drama about Mr. Fye, the name "Mr. Fye" came to me out of the blue, so I jotted it down in said notebook, for later use. When it came time to formulate an idea for a new play for Pulpfest, I referred to the notebook and saw the name. Then, I flipped a few pages back and saw the thumbnail outline for a script I'd written as a vehicle for a "Shadow"-like character. I immediately scratched out "The Shadow" and scribbled down "Mr. Fye" in its place, and then began writing in earnest. As with the best stories, the details came to me as I was writing: Character names, relationships, how a particular character might speak, the flow of the story, and – most importantly, to me – how our hero became the hero.

It's true – remember, I'd originally planned this story as something for Lamont Cranston, so all of that "power to cloud men's minds" jazz had to go. What you get instead is a one-hundred- percent-original origin story. Admittedly (and I don't think I'm spoiling anything by telling you this) Jinx Duncan is still feeling his way by the end of this first installment; but rest assured, dear reader: you'll find out more about him and his developing powers at the same time Jinx does, in future tales of "The Adventures of Mr. Fye"!