When I first got into reading comic books as a kid, one of my favorite type of stories would be the team up between two characters. It was magical to see Spider-man and Captain America work together or see The Hulk and The Thing go toe-to-toe. The creators of those comics made it feel like an event. These team ups felt like they were something special.

Because they were special. 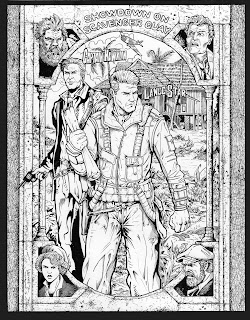 When Charles F. Millhouse first mentioned the idea for Pulp Reality #1 to me, a lightbulb popped up over my head. An idea clicked into place and I knew in that instant I had to be involved because there was a chance to do something special.

A little background. I own a character called Lance Star: Sky Ranger. Lance is an aviator adventurer in the grand pulp tradition who flies around the world from one exciting story to the next. Lance and the Sky Rangers have appeared in four anthologies and a collected edition of my stories from Airship 27 Productions. He has also appeared in comic book adventures and some new tales at BEN Books. You can learn all about Lance and his Sky Rangers at http://lancestar.blogspot.com.

Charles F. Millhouse is no stranger to pulp aviator 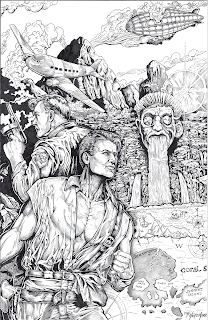 adventurers himself. Charles is the mastermind behind the Captain Hawklin series published by Stormgate Press. You can learn all about Captain Hawklin at http://www.choosetheadventure.net

My brilliant idea was to team up these two titanic New Pulp heroes for an adventure. There was only one hurdle. Would Charles be interested in such a titanic team up in his magazine? Would he want someone other than himself writing his character? As writers, we get attached to our literary babies. Trust me on this. Now, in my head, I assumed this idea was an easy yes, a no-brainer of an idea. However, if I’ve learned anything in my years in publishing, and some would say I’ve learned very little, I’ve discovered that my no-brainer ideas and other people’s no-brainer ideas are not always one and the same. I know, I was just as surprised as you by this revelation. 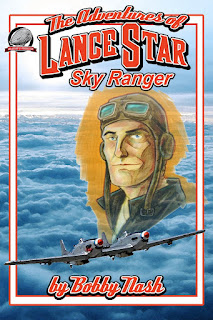 Luckily for me, Charles is a man of great no-brainer thought. Wait. I may have said that wrong. Suffice it to say, he thought it was a no-brainer too. Charles loved the idea and gave the story a big thumbs up. I was relieved. Whew. With the blessing of Captain Hawklin’s creator in place, I then faced the most hated problem any writer ever faced.

I had to come up with a story.

Not just any story would do, either. Oh, no. This had to be special, remember? Just like Hulk and Thing.

This had to be a good story.

Writing characters that aren’t yours can be fun, but also a bit nerve-wracking. On the one hand, you want to be respectful to the work that has come before and not be the writer that knocks a character off course. On the other hand, you kind of want to leave your mark as well. It’s a delicate balance between writing the best story you can and not completely screwing up said character.

I tossed a few plots about, rejecting them for one reason or the other before the one I settled on that eventually became the story appearing in Pulp Reality #1, a fun tale I called “Showdown on Scavenger Quay.” Pro tip: when writing pulp, you can never go wrong with the word showdown. Once I knew what Scavenger Quay was and how things worked there, I put Lance Star in a plane on a solo, undercover mission to infiltrate the island. Why? What was he searching for?

Then I sat back and watched the story unfold.

When it comes to writing, my #1 rule is that every story starts with the characters. I am a firm believer that if you know your characters well and you trust them, they will lead you where you need to go. I absolutely believe this. Don’t believe it? Try this test. Take three characters you know well (they don’t have to be yours) and drop them into the same basic plot. Based on how each character reacts to the plot you dropped them into, you will get three different stories. That’s because each character brings something unique to the plot and that determines the story.

Following Lance Star into a story was a pretty easy way to kick off things for me. I know Lance well, having been writing him since 2005, so I had a solid grasp on his character. I knew the good Captain Hawklin from reading some of Charles’ work and I used that as a starting point for the first time these two characters ever met. A few sparks flew. They are both alpha males in a high-flying (pun intended) position. These are men who are used to being in charge. To find themselves working together wasn’t an easy task.

Did they succeed? For that, you’ll have to read the story and decide for yourself. I am pleased with the story and thankfully, Charles gave it a thumbs up as well and I returned his literary toy back to him in the same shape I found him.

The icing on the cake for this particular story is that the cover art was done by the amazing Clayton Murwin. I’ve known Clayton for years, but this was our first big collaboration and I still remain in awe of the way he captured both Lance Star and Captain Hawklin. I still smile when I see it.

Playing with other creator’s toys is a lot of fun. It can also be nerve-wracking. I have been fortunate in my career to play with some cool characters I did not create like The Green Hornet, Domino Lady, Secret Agent X, Abner Perry, David Innes, Johnny Dollar, The Spider, The Avenger, and more. I’m thrilled to add Captain Hawklin to that list. Who knows, maybe our New Pulp flyboys will get the chance to fly together again.

Thanks for letting me play with your toys, Charles.