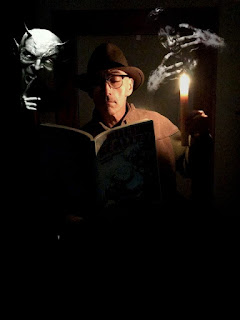 Pulps came to my attention late and comics were my gateway, strips as well as books. Our village market began carrying the Avon Phantom paperbacks in the early 1970s and I devoured as many as I could get, beginning with The Golden Circle by Frank S. Shawn. The reason? I recognized The Ghost Who Walks from gorgeous Gold Key comic book covers and knew, vaguely, he started as a newspaper strip. Maybe the Phantom is less than Pure Pulp given his graphic media origins, but those novels were boyhood nirvana of the pulpish variety, filled with exotic locations, death-defying action, a globe-hopping masked adventurer carrying out his multi-generational war on evil, and villains of the deepest dye.

The pulp literature double tap came soon after with DC Comics’ 1973 take on The Shadow. I was somewhat familiar with the radio program, but the character was of only passing interest until Michael Wm. Kaluta’s cover for issue #1 peered menacingly down on me from the top of the comics spin rack. Shadow quotes quickly peppered my conversations the same way Green Lantern oaths and Golden Age mystery men mottos had before. “The weed of crime bears bitter fruit,” indeed. “The Shadow knows!” Know he might, but he didn’t help much when it came to locating Doc Savage books. I tried with limited success even after the 1975 Ron Ely film, and once again comics intervened; there was a Marvel Comics adaptation. 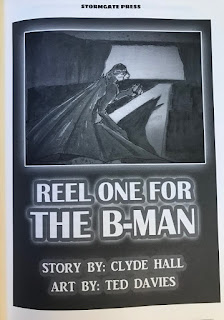 Roundabout as it was, my pulp initiation was complete and unwavering. When I heard about ‘Pulp Reality’ #1, a character I once created for RPG play came to mind. B-Man would be a little bit superhero yet fully pulp. An unlikely hero, without a vast fortune to rely on. The sort who enjoys beatnik crowds and music, not Men’s Mind Clouding 101 studies in some mysterious lost city. A former soldier, but not a great one and largely dismissive of the very notion of being a ‘hero’. Yet, someone who identifies with cinematic heroes deeply and loves movies.

Movies are magic, after all, cinemas the stuff dreams are made of. The Maltese Falcon told us so.  In truth, I might be biased. The first film my mother took me to see on the big screen was The Gnome-Mobile. It’s a live-action Disney film from 1967 featuring Walter Brennan, a very cool customized 1930 Rolls-Royce Phantom II, and a gaggle of wee folk. As amazing as a gnome-infested special effects extravaganza was for 5-year-old me, even more mesmerizing was the theater.

By modern multiplex standards, our hometown cinema was modest. In comparison with our small country cottage, the theater was colossal and filled with myriad wonders competing for my attention. Mysterious echoing foot stomps overhead (from the rowdy kids in the balcony, but I had no idea). The vastness of a snowy field of screen. Concession counters brimming with technicolor-packaged treats. The mouth-watering scent of hot, freshly buttered popcorn. Film and theater cast a permanent glamour over me that day, bell and book to the candle of a projector beam when the curtains finally parted. 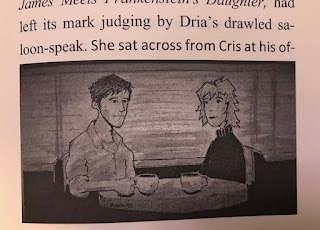 Over the years, movies joined books as the two main venues away from a reality often less pleasant and decidedly more boring than the alternates they offered. Movies can be cheesy, but they can also be mythic, and there’s no less amount of magic in either. A conjuring of screenplay, the talents behind the screen and upon it, the cinematographer’s alchemy. Fold them into the potion, bring the bonfire to medium simmer, and finish with one final ingredient: The theaters themselves, dream palaces fueled by nervous anxieties as crowds huddled together for the latest black and white newsreels from Pearl Harbor. Energized by teenage passion, young couples cuddled while Frankie and Annette romped across beach blanketed sands, their inhibitions weakened to a rock-n-roll beat.  Primed by the potent imagination of children gathered for untold Saturday cliffhangers, their fevered adolescent minds preoccupied all week fathoming how their hero could ever escape this latest peril.

Then came the parade of ‘What if--?’s. What if all that energy, all that emotion, somehow combined with a location? What if a person tapped into the mystic reservoir and manipulated it? What if it chose someone as a champion? What if said champion found an ally close at hand, one with knowledge of the Spirit World? What if I combined these elements and then had fun working in trivia, making up film ‘history’, and giving the champion and the seer funny dialogue, all while baleful villains were made to spit teeth and rue misdeeds?!? What if this was framework for the first B-Man story?

“Reel One for the B-Man” is the result, and it really is like many of my all-time favorite films. They’re entertaining because you feel the fun everyone had making the picture, and it’s contagious. Ted Davies is the Director of Photography for this story (i.e., the artist), and our brainstorming sessions over the phone weren’t just enjoyable, they inspired and helped me polish the final draft. Here’s hoping a bit of our fun creating B-Man transmits to everyone reading the story. If it does, then in the very finest Hollywood traditions…can sequels be far behind? Thanks to Ted for his hard work, and special thanks to Charles F. Millhouse for giving us the opportunity to share in the excitement of the New Pulp movement.

Thanks for watching, come back soon, and please be sure to throw away your popcorn boxes and empty soda cups before exiting the theater.