My first guest blogger of 2019 is Stephen Jared. Stephen is an awesome, New Pulp writer and storyteller. I urge you to treat yourself to his writings, you won't be disappointed.
Thanks Stephen, for joining us here at Stormgatepress.com.

I grew up when Steven Spielberg and George Lucas were releasing their early films. In interviews, especially while promoting Indiana Jones, they kept referencing classic movies. I soon wanted to know everything there was to know about classic movies. Thanks to VHS tapes, which were new at the time, I watched a lot of old movies when I was still very young.


The Jack Hunter adventures are a series of stories set in the 1930s and 1940s. Whether Shanghai, Cairo, or wherever, a lot of research goes into the settings. There are three stories so far (a fourth is completed), and my intention is to show some flexibility with the tone. In other words, some will be comedic, some may be more romantic, others may have elements of espionage, etc.


Solstice Publishing has made them available. If you purchase The Elephants of Shanghai you get the first two stories in one book. The latest is The Chameleon Thief of Cairo. I’ve been extremely fortunate with cover artists. Paul Shipper illustrated the first two, and Elizabeth Yoo illustrated the recent one. 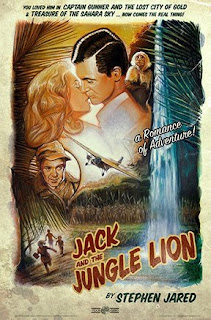 Here are samples from The Elephants of Shanghai and The Chameleon Thief of Cairo. 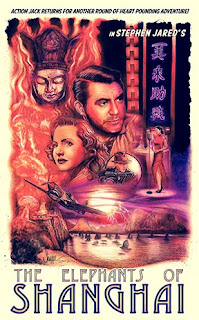 
Wang’s eyes swung to the side, while every other inch of him remained motionless. “A map of supply routes will be delivered to your room tonight,” he continued. “I have secured a boat to take you to Hong Kong. It can be ready whenever you like—”


Soaring to a feverish intensity, the crowd shouted and whistled as a strikingly beautiful Chinese woman stepped across the stage to a microphone that looked to be pleading for her touch. She wore a tight silk dress with a high-rising slit, scandalously exposing a thigh. A stiff upturned collar wrapped snugly around her neck. When she began to sing, the room was hers, as if she had cast a spell.


Noticing the overexcited look on Johnny’s face, Wang said, “They call her Summer Sometimes. She has a weakness for underworld figures.”


Thunderstruck by good fortune, Johnny caught Jack’s eye. He winked. He fidgeted and twitched. He pulled on his ears and nose, tugged on his ill-fitted suit, and mimed rowing a boat toward the stage.


Melting at the sight of the singer, Johnny chewed on his hands. The singer’s movements were sensual, teasing, and deliberate. It wasn’t until the second chorus that she slowly lifted her thigh out in the open, parting her silk dress like a curtain and electrifying the crowd with a touch of eroticism.


Soon the tune closed. Summer Sometimes bowed to rapturous applause. Demurely, she crossed the stage, taking her leave. Diamonds glistened with graceful movements. She raised a slender hand, acknowledging the demand for more, but left without hesitation, offering a glimpse of selfishness when it came to her seductive charms.


Johnny continued with his wild gyrations, slapping his hands ferociously. “Oh, boy! Oh, boy! Get a load’a that doll!” He whistled sharply, as loudly as he could.


The band continued playing. Stardust enchanted the crowd even absent its lyrics.


All eyes remained on the stunning vocalist as—


She walked to Jack’s table.


Wang was the first to rise and greet her. Extending a hand, he offered his compliments. “A delightful performance, Miss Sometimes.”


Even as she presented her hand to Wang, her eyes were solely on Jack. Her exquisite perfection, all the more so up close, was panic-inducing. She smiled a small smile. Her cheeks were bright wonders of unblemished softness. 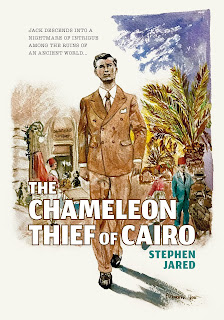 
Chetan Livrés & Café sat on a large avenue, flanked by Moorish arcades. Outside, an elderly merchant sold postcard-size paintings of ancient Egyptian life. The bookstore’s neighbors sold wristwatches, pocket-watches, and modern European clothes. A man wearing a linen suit flicked a cigarette to the feet of the merchant before entering. Jack and Clancy followed, finding a charming mess of books overwhelming shelves, climbing walls, and sitting scattered in stacks all over the floor like buildings in a miniature city. They moved carefully through the disorderly maze toward the back where a courtyard allowed patrons to socialize. Coffee and food items were served.


“Was he a collector of books or just a reader?”


“Then he was here. How about we sample the coffee and get to know the staff?”


Before the next hour passed, Jack and Clancy came to realize that not a single member of the Chetan staff spoke English. The coffee, however, was wonderful. According to a menu at each table, the coffee beans were imported from southern Arabia, ground locally, and blended with cardamom. They also ate from a plate of delicious sweet dates filled with goat cheese. There weren’t many of them, and so they discussed what else they might try. They settled on sweet cakes covered with coconut syrup. A second round of coffee came too.


Jack’s attention was eventually drawn to a man, seated alone and holding a folded newspaper. The man kept darting eyes at them. The man’s suit was rumpled, as though not cleaned in weeks. His stubble was more than a day old. When he noticed Jack watching, he raised his coffee and smiled. Jack returned the stranger’s greeting with a smile of his own.


“You are Americans?” he asked in Arabic-accented English.


Jack nodded, offered their first names, and then invited the man to their table. “A great pleasure to meet you,” he added. “Your name is …?”


“I am Kalem. You search for something other than books?”


The silk tassel on his tarboosh swayed as he sat, and all his words smelled of decayed teeth. He had a peculiar way of speaking. He shoved words from his mouth without lip movement, and as he did so, his bulging eyes swept the room with unrestrained suspicion.


“What makes you ask?” Jack replied.


“I sorry. I speak foolishly. Do not mind me. You are businessmen?”


“We could be open to business. We’d need someone to make introductions.”


“I do not know anyone, not anyone with money.” Kalem flattened his palms on the table, leaned in, and spoke in a conspiratorial tone. “Please, do not mistake me. I am not one of the disgruntled who speaks of liberating us from the wealthy English infidels. I am just a simple one, a happy-to-get-along Egyptian.” He straightened his back again and nodded, pleased with the definition he offered of himself.