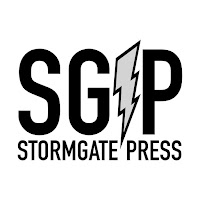 Without a doubt the hardest thing to do as a creator is connect with potential readers. Here are some basic facts.
1. The world is a big place, despite the phrase, "It's a small world, Isn't it?" And in the big wide world, people are wrapped up in their lives, such as family, jobs, lovers, food, movies, TV, sports, you get the point. And in the active lives of potential readers, there's you. The writer and artist - the creator who's trying to make a mark in this big old world - trying to get people to read what you've done. Which leads us to my second point...
2. It wouldn't be bad if you were the only writer vying for the attention of potential readers. But in this big old world you are not alone. Oh, I'm not talking about the Kings, Butchers, or Brad Thors of the world. They're a given. No, I'm talking about the other eager independent writers like you, who have such a big leap on you when it comes to some sort of notoriety that you wonder if there is a point to getting out there and working hard to get the attention. It's so hard, there are so many writers trying to be heard, to be seen, to be your competition. Which brings me to my third and most important fact.
3. Other independent writers are not your competition. They are your equals. Sure, some of them have had their foot in the door longer, or are more outgoing than you are and they know which book expos to attend, and what cons to book, or what advertising works better. But it’s not a deep dark secret on their part. Other writers are not your enemy. You'll find that many of them want to see you succeed. They're genuinely excited when you prosper and offer the right words when you fail. Other writers are your support group.
Seek out other creators, ask for their advice - and take it. You'll learn from their mistakes, and maybe you'll bring fresh ideas to your newfound mentors that they might not have seen.
Writers write alone, but they by no means must do everything else alone.
I'm honored to have a list of authors who I consider my friends. It's from their kind words and encouragement that drives me forward every day. So, take heed my friends, seek out those writers, it will be the best decision you'll ever make. And maybe in the end, you’ll find those potential readers you’re looking for.