Happy Friday to all of you, and welcome to the first of what I hope will be many guest blogger posts. Over the years I have met a number of talented writers, and I’m fortunate enough to call them all friends. We writers are a unique bunch who have chosen this crazy profession because we are passionate about telling stories and entertaining through our words. 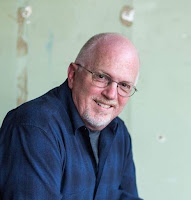 One such writer who is passionate about storytelling is John C. Bruening, the author of Midnight Guardian: Hour of Darkness, a New Pulp adventure book set in 1936 in Union City. John's descriptive settings, and on-point dialogue has set the standard for which all New Pulp stories should be told. I believe that anyone craving a high-adventure story should treat themselves to Midnight Guardian: Hour of Darkness, I'm sure you won't be disappointed. 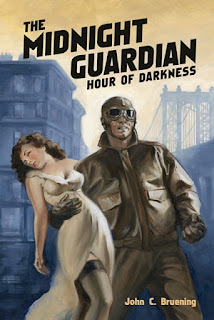 I was thrilled when John agreed to be my first guest blogger, and I gave him free-range to talk about his writing procedure and give some insight to his creative process.
So, without further ado, I present John C. Bruening.

First of all, thanks to Chuck Millhouse for inviting me to step in and contribute to his Stormgate Press blog. If you haven’t read any of the books in Chuck’s Captain Hawklin series yet, you really should check out at least one. Go ahead. I’ll wait…

Okay, having done that, you might wonder how Chuck does it – or how any other writer goes from a blank page to a complete novel. I can’t speak for Chuck’s process, and to the best of my knowledge, there is no “best way.” There are as many ways to craft a story as there are writers, and as long as the job gets done and the end product is engaging and entertaining, who’s to say what’s right or wrong?
Some writers prefer to start typing with just a fragment of an idea and see where it takes them. For these folks, building characters – and building a story around those characters – is a very organic, exploratory exercise. There’s something to be said for this approach. From beginning to end, it keeps things fresh and surprising, and the writer is continuously open to the kind of unexpected twists and turns that can make a story interesting.

I am not that writer.

Don’t get me wrong. As a writer and a reader, I like well-developed characters in a story with unexpected turns and surprises. But I’ve never been the kind of guy who’s comfortable just winging it. My great fear is that I’ll burn up precious time following paths that could potentially go nowhere. Before I even get started, I need a fairly clear sense of where it’s all going. I need a map. I need a plan.

For me, that fragment I mentioned a minute ago is the beginning of a more structured process with a couple middle steps. The fragment is the seed of an outline – a series of separate and distinct paragraphs, each one describing dialogue, action, interaction and other plot developments. Generally speaking, each of these paragraphs becomes the blueprint for each chapter of the story.

For long-form fiction, I tend to follow the classic three-act structure. Entire books have been written about this, and there are plenty of places online where you can find a good explanation of what it is and how it works. The three-act structure actually goes back thousands of years, and it has become a widely accepted guide to tell the writer what needs to happen at certain points along the way to create the tension and resolution that make a good story.

Again, I’m not suggesting this is the only way to build a story. There are others. But the three-act structure is an approach that has worked for some of the greatest storytellers, novelists, playwrights and screenwriters in history. I’m not about to question their methods or their success.

So once I have twenty or thirty (or more) paragraphs in an outline that takes the story from “Once Upon a Time…” to “The End,” I’ll start expanding on the paragraphs. This is where characters start talking and doing stuff. This is where decisions and actions and reactions and consequences start to push the story along to The End. I might take a couple brief detours along the way – because some of the coolest stuff can happen on the detour – but I can save a lot of time and avoid frustration if I keep at least one eye on my destination.

When I get to The End, I have a first draft. It’s usually a mess, with plot holes and continuity problems and a guy named Bill on page 43 whose name mysteriously changes to Steve on page 127. But it’s a first draft, and most writers agree that the first draft is the hardest part of the process.

At this writing, I’m finishing the first draft of the second book in my Midnight Guardian series. It already looks a lot different from the outline I started with a few months ago. And I can already tell you that things will change even more by the time the final draft is completed and the book is published. But that evolution has been manageable because the map I drew at the start of the journey helped me get where I wanted to go.

This is what works for me – or at least this is what has worked for me so far. But I’ll make this point one last time because it’s so important: the process I’ve described above is just one man’s approach. I’m the last person to suggest a right way or a wrong way. For those writers who prefer to wing it, more power to you. I admire your courage to take that kind of leap.
At the end of the day, if you have a good story, it doesn’t matter how you tell it. What matters is that the story gets told.
###

John C. Bruening is a fellow Ohioian and resident of Cleveland. He has been a professional writer since the 1980's working in Journalism, editing, publishing, marketing, advertising and corporate communications.
John's works can be found on his Amazon Author page and through the Flinch Books Facebook page