Guest Blogger: Jim Beard: LET THAT BE YOUR LAST NYARLATHOTEP

Hello everyone, here we go with week four of my guest blogger series. If you thought Brian K. Morris' post last week was weird. Well it's about to be topped by Jim Beard.

Jim Beard became a published writer when he sold a story to DC Comics in 2002. Since that time he's written official Star Wars and Ghostbusters comic stories and contributed articles and essays to several volumes of comic book history. His prose work includes the novel SPIDER-MAN: ENEMIES CLOSER; co-editing and contributing to PLANET OF THE APES: TALES FROM THE FORBIDDEN ZONE; a story for X-FILES: SECRET AGENDAS; GOTHAM CITY 14 MILES, a book of essays on the 1966 Batman TV series; SGT. JANUS, SPIRIT-BREAKER, a collection of pulp ghost stories featuring an Edwardian occult detective; MONSTER EARTH, a shared-world giant monster anthology; and CAPTAIN ACTION: RIDDLE OF THE GLOWING MEN, the first pulp prose novel based on the classic 1960s action figure. Jim also currently provides regular content for Marvel.com, the official Marvel Comics website.

So, without further delay, let's get into Jim's blog post, a post that in no way reflects the views of Stormgate Press and are of

the author's own point of view. You have been warned... read on...

LET THAT BE YOUR LAST NYARLATHOTEP

By Jim “The R’lyeh Kid” Beard 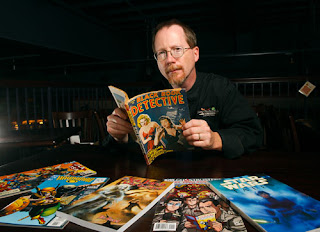 I’ll try to keep this short because I know you have things to do, people to kill. Plus, I’m addressing this to the writing community, so I know their time is precious. I really just have one, important thing to say—no, suggest, actually:
We have to, as a community, stop digging up H.P. Lovecraft’s grave and picking at his bones.
There, I said it. Whew. You don’t know how good it felt, I assure you. That’s been festering inside of me for years, gnawing away at me like some nameless thing from the Stygian depths, like rats in the walls, or a sort of weird, otherworldly dread, or…
Damn, now I’m doing it.
Before I sat down to write this little manifesto, I plugged in “Cthulhu” in an Amazon search, and the results were staggering in their width, breadth, and depth. A million fiction anthologies with clever titles are only the tip of the iceberg; there are products of every conceivable type and topic, even toys, for God’s sake…and, and children’s books, and Cthulhu Monopoly!
Enough. Let us have an end to it. And it should start with the writers.
You know who you are. You’re sitting there reading this while taking a break from writing your Cthulhu-My Little Pony mashup, or your Old Ones cookbook, or worse still, your thirteenth Lovecraft-Sherlock Holmes short story for inclusion in the new anthology A Holmes in the Wall: Lovecraftian Tales Designed to Give You Colours Out of Space.
Stop it, I beg of you. You have the power to stop, if you would only choose to do so.
Listen, I get it, I really do. Lovecraft’s place in literary fiction is assured, rest easy, because yeah, he did something different and it was weird and it felt unfinished and you want to add to the Mythos and…but, listen; you and I know that stuff wasn’t very good to begin with.
There’s the rub. I think that’s what it is, what lies at the root of this Lovecraft obsession. The guy’s writing wasn’t that good and everybody knows it and everybody’s trying to make something good out of it, or at least better than ol’ H.P.’s stuff. Back in 2001 I picked up a Lovecraft collection called Black Seas of Infinity because, sure, I’d always wanted to read the stories and see what it was all about. By the third or forth tale I was reading the book right before bed every night because I knew it would put me to sleep, guaranteed. When it wasn’t making me want to kill myself, of course.
Okay, I’m going a little long with this and not making any friends by it, but I think if you really examined your feelings and thought it through, you’ll realize we don’t need another Cthulhu anthology, novel, collection of poems, jigsaw puzzle, or baby’s plushie. Enough’s enough. Too much. Way too much for things based on stuff of dubious value to begin with.
Think of the children, if nothing else. Think of them, if you won’t think of your fellow adults who cringe at every snappy twist on “Cthulho Fhtagn!” that appears on the shelves at that little independent bookstore down the street. If just one child can be saved from being buried underneath the avalanche of Lovecraftian pastiches, won’t it be worth it? Huh?
Think about it. That’s all I’m asking.
Oh, and stop acting like the Necronomicon is real. It isn’t. Dude invented that, too. Word.