Guest Blogger: Brian K. Morris Where For Art Thou, Muse?

Welcome everyone to week three of my guest blogger series. Today we have a real treat. The multi-facet, multi-versatile and multi-talented Brian K. Morris. Brian is an independent author who has written everything from Horror, to comedy to pulp heroes and more. His writing is vivid, well-constructed and highly-entertaining. If you haven’t treated yourself to some of Brian’s work (which you should) you must read his Skyman Battles the Master of Steam, and Valcana: Rebirth of the Champion, you’ll be glad you did.
So, without holding this up any longer, take it away Brian…
"O! for a muse of fire, that would ascend the brightest heaven of invention." William Shakespeare, famous playwright. 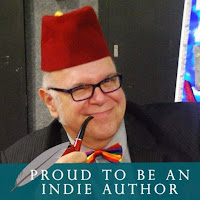 Granted, I used to do just that. I recall sitting at my desk at the campus newspaper one Friday night, in my college days, as we dutifully assembled the latest weekly edition. I needed to write my usual column of unpopular opinions, but my wellspring of good ideas yielded nothing. Even my bad idea well went dry.

I did the only responsible thing a writer could do … I rested my elbows on the desk, placed my chin in my hands, and stared into the distance. It wasn't until someone came back into my office after twenty minutes to loudly announce that I'd not moved an inch since he left that I realized I needed to find and install an idea generator.
Sure, it took a while. I eventually located that generator, but I had to build it before anything else.

"Most people wait for the muse to turn up. That's terribly unreliable. I have to sit down and pursue the muse by attempting to work." – Nick Cave, musician.

The summer after I graduated from college, I met a comic book writer who was asked the Eternal Writing Question, "Where do you get all your crazy ideas?" His reply was, "Everywhere." He read newspapers, watched the evening news (yeah, before the 24-Hour News Cycle), listened to music … in short, he filled his head with ideas, facts, concepts, anything that could form the foundation of a story.
He said to select an incident in the daily news. Add the hero that would be perfect to solve the challenge, then give him/her a flaw that must be overcome to save the day. Change the genre, the setting, whatever … add your own touches, toss in some plot twists. BINGO!
From that point on, it became a matter of training my brain to LOOK for story ideas, then write them down. Soon, I had more ideas than time to write them, given I had a nine-to-five jay-oh-bee by then. However, I didn't find the time to write, I MADE the time.
And fueled with ideas, the writing came to me more quickly. I moved from working pro bono to actually getting paid for my efforts.

"Sixteen years as a freelance features journalist taught me that neither the absence of 'the Muse' nor the presence of 'the block' should be allowed to hinder the orderly progress of a book" – Jim Crace, novelist.

Eventually, I built up a sideline as a playwright, copy writer, and pop culture reporter. I figured out the ways to network and forge relationships with my interviewees, my employers, and my peers (CLUE: it's also called "making friends"). And the more I wrote, combined with my other efforts, the more I found to write about. Now, I couldn't turn off "the generator" if I wanted to, which I didn't. I was having too much fun.
The money and comp copies didn't hurt either.

"Anyone could sit and wait for inspiration. Talent was being able to conjure it up, to GET inspired." – Paul Stanley, musician and cultural icon.

Then in 2012, I made one of my few New Year's resolutions. I promised that I'd spend the year working harder on my writing career in the hopes of building that money to a point where it exceeded my primary income.
In March of that year, I was brought into my District Manager's office for a talk. He complimented me on my work ethic and my talent. However, since the company's stock underperformed on the New York Stock Exchange, twenty-seven people in the state of Illinois were going to be let go so the company gave the impression of "handling" their expenses wisely. It turned out I was one of those fated for "downsizing."
I panicked. Who could blame me? I had a mortgage, regular bills, and a wife to support.
Then it hit me … I also had a Plan B! Now I had to make the writing work. I went through all six stages of Kubler-Ross in 45 seconds, eager to leave and begin this new phase of my life. The "generator" revved up until all gauges ventured deep into the red zone.

Part of my severance package included being placed with a re-employment agency. While taking in their numerous webinars, I found one on Electronic Publishing and booked a seat for the lecture. When it ended, all I saw was the potential. No more vanity press. No more pushing your manuscript into the mail again and again until you found an agent or a publisher who's accept it. No more waiting on other people to make things happen. I became evangelical in my fervor for the current state of publishing.
To this day, I shudder to think where I'd be if I'd not attended that webinar. Now my "generator" had a place to move its output. I'd publish my own work until it got noticed by enough people that I could make a living at it.
Beginning my new occupation by releasing a book through Kindle Direct Publishing, I wrote a story using a Valiant Comics character I liked so I could plug into an established fan base. Then I wrote Santastein: The Post-Holiday Prometheus because I had a rejected 10-minute stage play that I could expand. From there, I created other, newer works. Through relentless marketing, I gained new friends in the independent writing field, both writers and editors. This led to more work and more exercise for "the generator."
Now, I'm a "hybrid" writer. I've published myself, which led to others wanting to use my work.
I still send out stories to other editors. However, if they didn't want it, I knew one publishing house who'd print anything I wrote: ME!
Has it been easy? No more than trying to pull yourself off the ground by your own hair. It's been uphill and it's still uphill to this day in many ways. The field changes constantly and there's always something new to learn.
Naturally, I wouldn't have it any other way.
I still recall that (much) younger me, sitting at my desk, literally paralyzed by an inability to devise a reason to write. I still see that person in so many people who ask me how to take that first step to becoming a paid freelance writer and I tell them what many people told me on the way to Now.
Manage your time wisely. Learn to prioritize. Remove your distractions. Work like you have 30 days to live. Make a plan of attack and reward yourself when you reach your benchmarks. Respect deadlines, yours and those of your editors. Never stop learning. Stay on top of changes to your profession. Make friends in the field because they're awesome and have much to teach you. Learn to be patient … well, as much as possible.

And build that "generator."
"You can't wait for inspiration. You have to go after it with a club." – Jack London

NEVER THE END
Brian K. Morris is an independent publisher of books and comics with his Freelance Words and now, Rising Tide Publications as well as a freelance writer, "award-winning" playwright, occasional actor, frequent convention guest and public speaker, as well as a former morticians assistant. His latest book is The HauntingScripts of Bachelors Grove and his newest comic book release is The Ghostly Tales of Spencer Spook #1, featuring the classic character from Columbia and ACE Comics.
He lives in Central Indiana with his wife, no children, no pets, and too many comic books. Follow his Rising Tide page on Facebook. He's also on Instagram and Twitter, along with his own website, RisingTide.pub.