Very seldom do I connect with someone over social media the way I have with Rick Bradley. Rick is cut from the same jib as most of us indie writers. New to the fold, Rick has grabbed the reins with both hands and held tight. There are many people who claim they want to be a writer, but where they have spun in their tracks afraid to dive in, Rick has taken the plunge. In a very short time he has went from saying he wants to be a writer, to being a being a full-blown author. He's written a short story published in a newly released anthology, to writing his first book, to be released soon, but let's let Rick tell his story of why he chose to join the ranks of the literary insane. In closing, I know Mr. Bradly is going to do amazing things, and I can't wait to see what comes next for him. 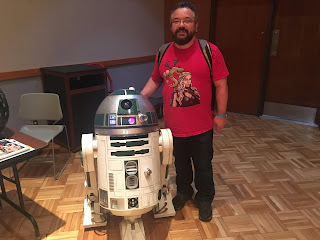 I’ve had a love of books for as long as I can remember. My sister would read to me every night and the one I requested many times was Charlottes Web. It is still one of my all time favorites. When I was able to read for myself I had my nose in a book often. Well, when I wasn’t making up stories of He-Man and Optimus Prime fighting Mum-Ra with my action figures. Even as a kid I had stories to tell.

In Junior High I got my first Dungeons and Dragons Boxed Set. After learning the rules with the pre-made adventure I set about making my own stories. My elf mage, Alsim, along with a friend’s character, Logan, went on so many adventures. Eventually we got a couple more friends in the group and even expanded to other worlds, Marvel Super Heroes (a still fun TSR RPG game that came out in the 1980’s), Vampire the Masquerade, Robotech, Chill, and more.


I usually was the Storyteller in the games which I did not mind. I loved crafting worlds and getting reactions from my friends. One of my favorite compliments came while I was running a game of Farscape (if you have not watched the show do it now!) and around that time Firefly had come out. I had not seen any episodes yet, but a friend accused me of ripping it off. After I convinced them I hadn’t watched it yet (don’t worry that has since been remedied many times over), they said I was a Joss Whedon of RPGs.
In High School I took a creative writing class and loved every minute of it. I still have a couple of the stories from then that I’ll be fixing up to publish. In college my English teachers would always wonder what madness my next paper would entail.
I wanted to write books and have them published, but I had no idea how to do it. Getting a publisher back then was pretty crazy impossible and self publishing was nothing like it is today. I still wrote RPG stories for my friends but that was about it. I had many novels bouncing around in my head, but none on paper.
Flash forward quite a few years to today. I have a 15 year old son who wants to be a graphic designer and animator, a 1 year old daughter who is the apple of my eye and loves music, and a beautiful girlfriend that is so very supportive. My little town has a Comic Con every year, Burg Con. There was a writing seminar and I decided, why not I’ll check it out. I cannot stress how thankful I am that I did. 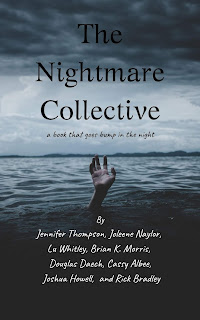 The seminar was ran by Brian K Morris of Rising Tide Publications www.risingtide.pub, Amy Hale of www.authoramyhale.com, and Cathy Jackson of https://m.facebook.com/AuthorCJackson. I had about a million and one questions I wrote down and was not able to get through them all of course. I asked if I could friend them on Facebook and my life changed. Those three have been just amazing. If I had a question they answered it or showed me where to find the answer. Brian has a weekly Facebook Live Show called Clever Title Pending on Tuesday nights at 7pm EST and took one show to allow me to ask anything I wanted. For over 2 hours he and his writer/artist friends answered question after question.

I now feel like I have an extended family of some of the most creative people on the planet and I must say I am one happy guy. I even have my first story published in a horror anthology, The Nightmare Collective. Which you can get on Amazon. https://www.amazon.com/dp/1651014485 All it took was one decision to put myself out there and try. It’s never to late either. I’m 41 and am going after my dream.
Thanks for reading my ramblings. I hope you enjoyed it and if you’d like to see more of me please go like my Author page on Facebook https://www.facebook.com/rbradley42/