An Insight into “Absolution” A Novel in the Serena Darkwood Adventures 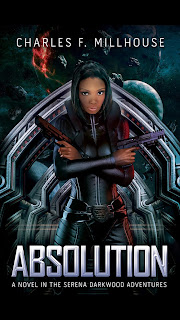 I’ve always wanted to create and write a TV series. Fill it with incredible characters, interesting locations and wild story plots. Most people will never get the chance to be the producer of a series, but writing a novel series, you can let your imagination go wild. And that’s what I’ve set out to do.

Everything I’ve written over the last twenty years has led me to Serena Darkwood. Absolution is the culmination of many years hard work, honing my skills not only as a writer, but as a story teller, the creator of worlds and magnificent characters.

Serena Darkwood is a strong, complex, determined woman who is feared and desired for her many talents. She is a loner, a smuggler and known not to be trifled with. She lives by a simple code, take the job, don’t ask questions and get paid. But remaining neutral isn’t one of Serena’s best attributes. One of her greatest flaws, and strengths is that she cares. She’s not a hired gun, but she’s handy with her old galactic equalizer – a weapon that means a great deal to her, and she is not afraid to kill if it’s for the right reason.

Absolution: A Novel in the Serena Darkwood Adventures is now on ebook pre-sale for $3.99 on amazon.com and is set to release on June 18, 2018. A paperback version will be released the same day for $14.99

Email ThisBlogThis!Share to TwitterShare to FacebookShare to Pinterest
Labels: The Making of Absolution